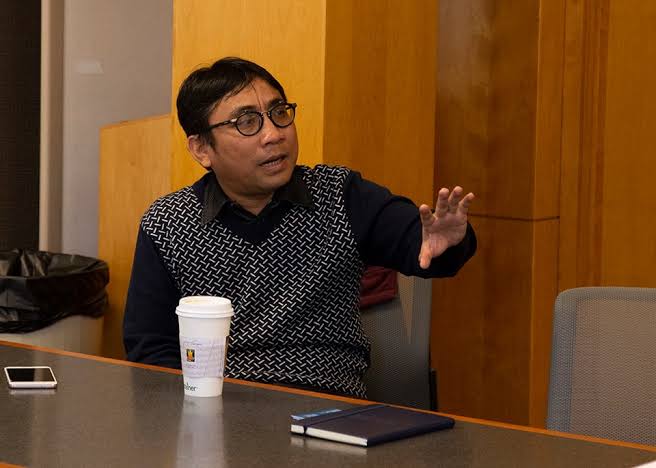 This article was published in the International Journal of Health Promotion and Education, volume 58 issue 3, 2020, a special issue highlighting the social determinants of health. The journal of Taylor and Francis, based in the UK, is the official journal of the Institute of Health Promotion and Education, an international community of academics/researchers/health professionals with expertise and interest in health promotion.

Dr. Sudirman accomplished his article when he was a visiting researcher (a visiting fellow supported by the 2019 Kementistek-Dikti SAME Program) at Liverpool School of Tropical Medicine (LSTM). So he could edit articles with fellow researchers/co-authors at LSTM, namely Professor Miriam Taegtmeyer and Dr. Rosalind Steege.

The Pittu Laungani Award is an award given to researchers whose articles emphasize the importance of local cultural aspects and their influence on people’s attitudes to accessing essential health services. This award is dedicated to Dr. Pittu Laungani, an Indian-born scientist who pursued a career as an academic in the UK. Moreover, he has had a long career and a significant contribution to developing the science of health promotion and the importance of culturally appropriate health intervention programs.

The article written by Dr. Sudirman Nasir, together with several co-authors from various countries such as the UK, the Netherlands, Indonesia and Ethiopia, is the result of international health research, a collaboration between several research institutions/universities such as Universitas Hasanuddin, Liverpool School of Tropical Medicine, Eijkman Institute, Royal Institute of Tropical Medicine (Netherlands), Reachout Indonesia and Reachout Ethiopia.

REACHOUT is an international research project that aims to understand better the factors that support and restrain the performance of close-to-community health workers in the two Asian and four African countries above. This research also aims to strengthen local health systems in these countries.

In an interview on Tuesday (18/5), Sudirman Nasir explained that this research took five years to finish, from 2013 to 2018. Indonesia and Ethiopia chose to focus on the role of health workers on the front lines to reduce maternal mortality and improve maternal health/women’s health.

“The focus of this article is to compare the experiences of the two countries, Indonesia and Ethiopia, which have high maternal mortality rates. Although Ethiopia is much higher than Indonesia, both are high in both Asia and Africa. One of the factors is that there are still many obstacles, including those related to local culture, experienced by women in research locations in both countries to give birth in health facilities. Giving birth in health facilities and being assisted by health workers is one of the key aspects of efforts to reduce maternal mortality,” explained Sudirman.

The research conducted by REACHOUT is operational, in addition to collecting data at research locations. It also includes the design and implementation of the limited intervention (piloting) programs to strengthen the capacity of close-to-community health workers and local health systems in research locations (Asian and African countries).

This research consortium has produced dozens of academic and non-academic publications such as research reports, development reports (progress and obstacles) identified during this operational research, and lessons learned from the pilot (interventions) programs. (*/dhs)