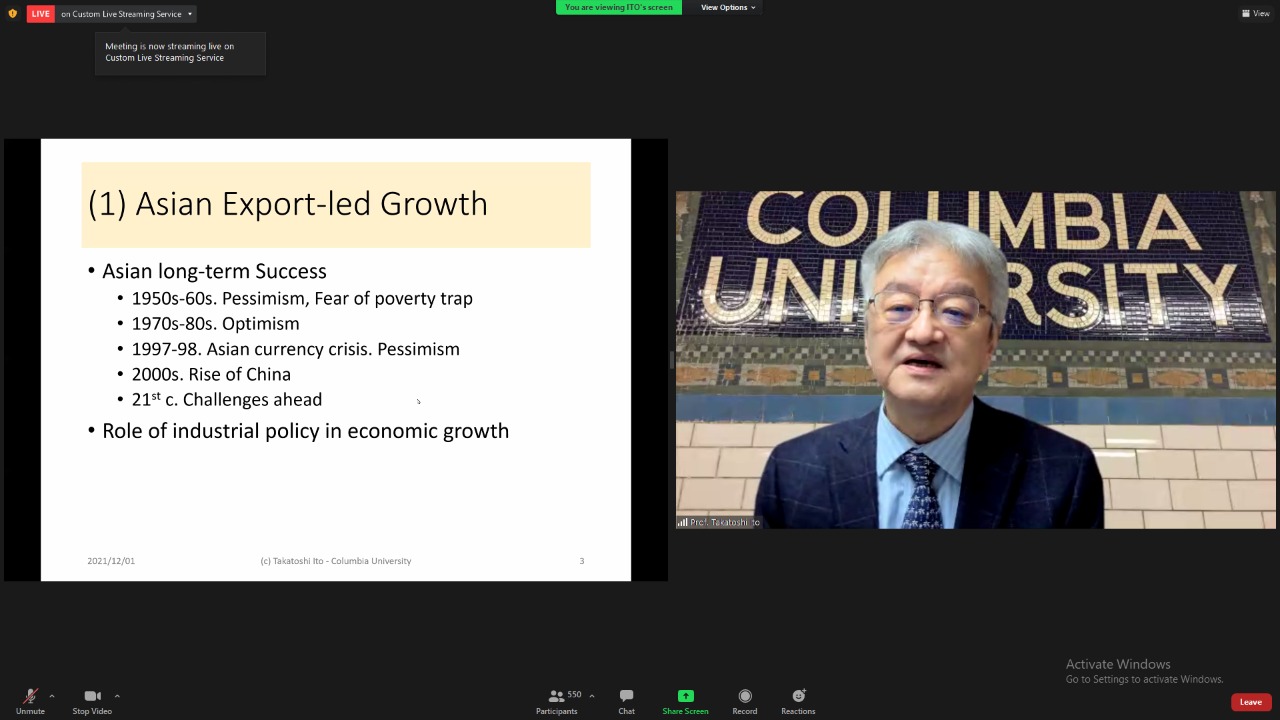 Professor Takatoshi is an economist recognized internationally. He served as a member of the Prime Minister’s Council for Fiscal Economic Policy from 2006 to 2008. He is also a senior official at the International Monetary Fund (IMF) and the Ministry of Finance of Japan. In addition, he has also been serving as Dean of the University of Tokyo’s Graduate School of Public Policy for the past two years and professor at the National Graduate Institute for Japanese Policy Studies.

Prof. Takatoshi explained “The Role of Trade and Finance in Economic Growth in Asia”. He presented four focus discussions on economic growth driven by export activities, international trade and finance, the currency crisis and future challenges in trade liberalization.

Exports have driven Asia’s long history of economic growth. It started in the 1950s-1960s, where people did not have freedom and were still plagued with fear and pessimism about the poverty trap. Around the 1970s, the public’s sense of optimism to develop, especially in the economic sector, was increasingly visible through various trading activities.

“The development of the Asian economy as a growth centre through product exports is very clearly visible. Industrial policies, the role of education, international trade, domestic savings markets and financial institutions are the driving factors. This growth has been increasingly visible since 2000, where there has been a strengthening of the international financial sector such as building the AllB and making the RMB the currency of the SDR composition,” explained Prof. Takatoshi.

Furthermore, Prof. Takatoshi added that international trade occurs because every country wants to gain trade, which producing countries will enjoy (exporters) and buying countries (importers). The benefits of trade will directly impact a country’s economy, resulting in the creation of a policy called trade liberalization.

“Trade liberalization is always considered to benefit the state because it benefits importers, consumers, and exporters. However, it is often not profitable because there is a threat of crisis due to liberalizing financial flows,” added Prof. Takatoshi.

Southeast Asia Lecture Hall is a program that aims to provide world-class lectures by leading academics and experts in their respective fields to students and youth in the Southeast Asia region. The program comes against the gaps in access to high-quality education in Southeast Asia.

After the presentation, the activity continued with a discussion and question and answer session. The activities guided by Prof. Dr. Jose Mora (Professor and Global Affairs Program Chair, American University of Phnom Penh) as moderator was attended by approximately 1,000 participants from various countries.