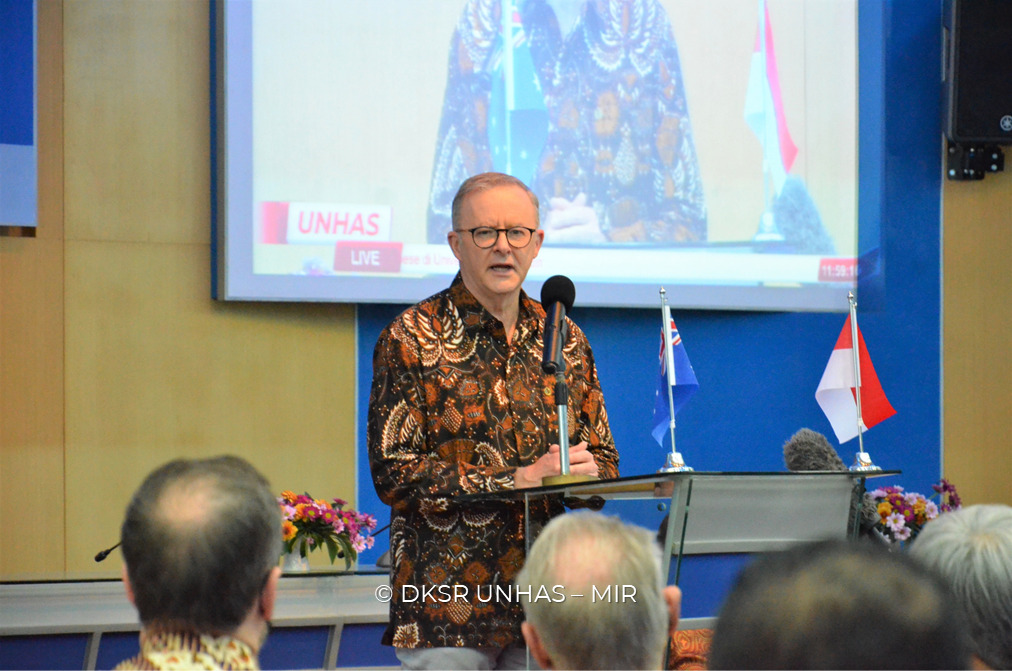 Australian Prime Minister, Anthony Albanese, paid a visit to Makassar City on Tuesday (7/6). Shortly after landing at Makassar’s Sultan Hasanuddin International Airport in Maros, at around 11:00 AM, Prime Minister Albanese went straight to Universitas Hasanuddin (Unhas) at 11:25 AM.

On the occasion of hospitality in the Senate Room 2nd Floor of the Rectorate Building, the Rector of Unhas expressed his gratitude and appreciation for the presence of Prime Minister Albanese and his entourage. Prof. JJ emphasized that the relationship between Indonesia, especially Makassar, and Australia has a long history, which can be traced back more than 200 years ago.

“And today, we will celebrate the sustainable bonds of education and people to people relations between South Sulawesi Province and Australia,” said Prof. JJ.

According to Prof. JJ, Unhas itself has a special connection, in which there are more than 150 Unhas lecturers and staff who are Australian alumni. Unhas has also established research collaborations and deep educational cooperation with various universities in Australia.

“One of examples is the collaboration between Unhas and Griffith University in archaeological research has found the oldest cave wall painting in the world, which is believed to date back 45,500 years,” said Prof. JJ.

The position of Unhas in Eastern Indonesia encourages the importance of strengthening relations with countries in the Pacific, especially the South Pacific.

“We believe, neighbors are the closest family,” said Prof. JJ.

Meanwhile, Prime Minister Albanese in his reply speech expressed his pleasure and happiness for being able to visit Unhas in Makassar. His visit to Makassar is the right decision considering the historical connection of trade between Makassar residents and indigenous Australians.

Furthermore, Prime Minister Albanese said Makassar has a bright future in line with Indonesia’s future development by becoming one of the five largest economies in the world.

“My visit to Makassar is an affirmation that the Australian Government really understands how Indonesia is a very large region. This is certainly a great opportunity to build partnerships in various fields,” said Prime Minister Albanese.

During this visit, Prime Minister Albanese and his entourage also had a dialog with Unhas students. In a relaxed and casual atmosphere, the Australian delegation took the opportunity to discuss and take selfies with Unhas students and academics.

The visit of Australian Prime Minister Albanese to Makassar is a historic moment, because this is the first time the Supreme leader of Australia visiting this city. For Unhas, this is an honorable achievement, because the largest campus in Eastern Indonesia is the first destination visited by Prime Minister Albanese when he and his entourage arrived in Makassar.

The visit and gathering program ended with a press conference with the domestic and foreign mass media 12.45 AM.