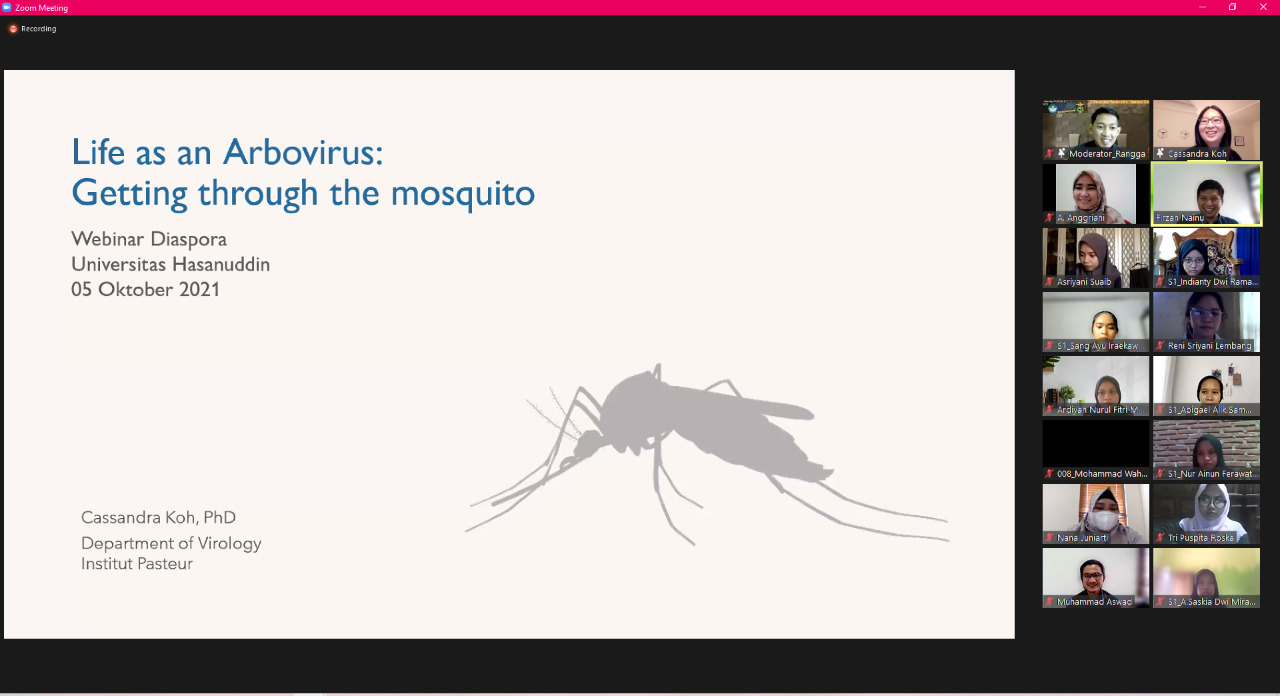 The Faculty of Pharmacy, Universitas Hasanuddin, organized a Guest Lecture entitled “Life as an Arbovirus, Getting Through the Mosquito”. The activity was conducted virtually through the zoom meeting application on Tuesday (5/10).

Dr. Cassandra explained the transmission and the cause of Arboviral disease. Moreover, she discussed biological methods developed to block the infection, the potential for arboviruses to build resistance to intervention methods and good virus detection in mosquitoes.

Arbovirus is a term used to refer to a group of viruses from various families, which infect arthropod vectors, such as mosquitoes, ticks, to vertebrate hosts such as humans, monkeys, horses, and birds. Arbovirus is an abbreviation of arthropod-borne virus (ARthropod BOrne virus: Arbovirus) that can survive in nature.

In the transmission process, insects as infectious hosts or vectors can be mechanical vectors in which disease-causing hosts such as bacteria, fungi or parasites move from one place to another.

Arboviruses overcome infection barriers by determining the ability of the arbovirus vector to transmit the virus from one vertebrate host to another host. The primary antiviral immune response to insect-specific sequences allows the virus to establish a persistent infection that persists throughout the host’s life.

Furthermore, Dr. Cassandra explained that mosquitoes are suitable vectors because of their blood-sucking behaviour and wide geographic distribution. In this case, Arbovirus must survive on different immune systems because, with the increasing number of humans, the transmission of mosquito viruses will also increase, so arboviruses must compete with other components of the mosquito microbiota.

Understanding disease ecology can help students block the transmission of Arboviral diseases, and vector control is the most cost-effective way to control infectious mosquito disease.

Approximately 200 participants attended the guest lecturer that ended at 15.30 WITA.