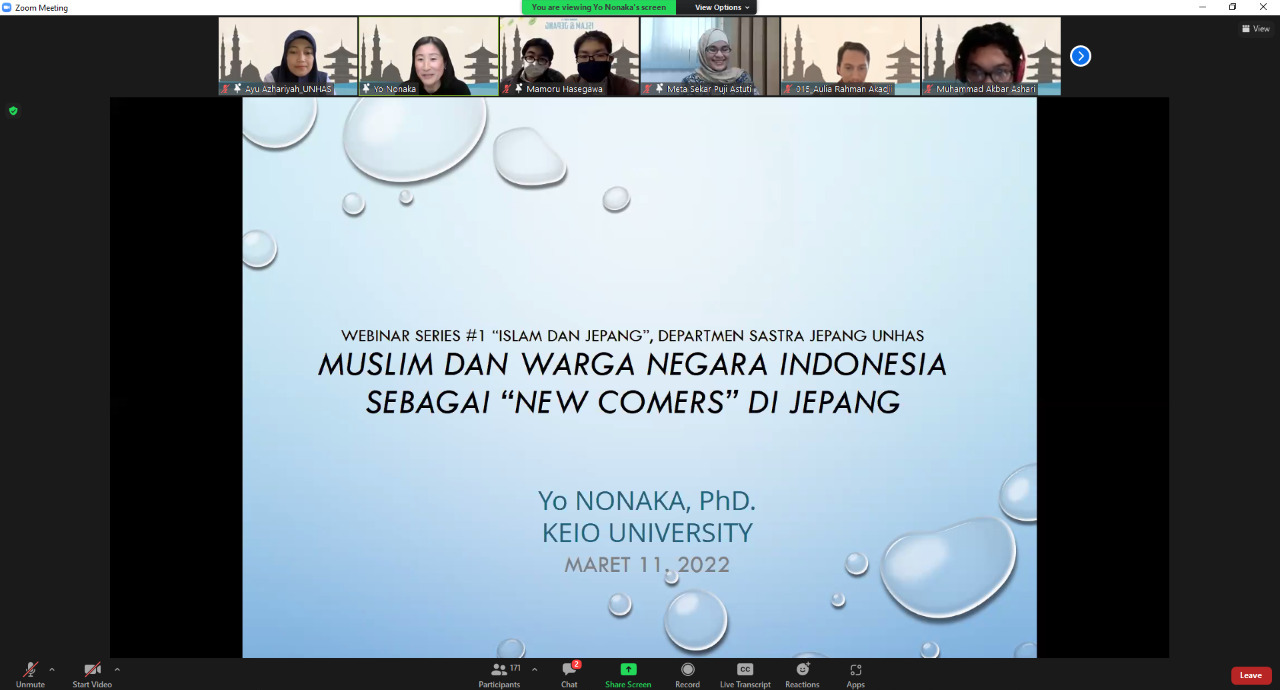 Japanese Department of the Faculty of Cultural Sciences held Seminar Series #1 with the topic of “Islam and Japan”. The event took place virtually through the Zoom Meeting application on Monday (11/3).

This webinar managed to invite Yo Nanaka, Ph.D. from Keio University, and Mamoru Hasegawa, a Muslim convert from Japan. Meta Sekar Puji Astuti, S.S., M.A., Ph.D., the head of the Japanese Department, took part as the moderator of the webinar.

In her speech, Meta Sekar Puji Astuti, S.S., M.A., Ph.D. mentioned that there are many interesting stories from Japanese Muslims. Those stories will be shared to broaden the knowledge and insight of Unhas students.

The first presentation was delivered by Yo Nonaka, Ph.D. from Keio University, Tokyo, Jepang on the topic of ‘Muslim and Indonesian as the New Comers in Japan”.

She explained that Islam as a faith in Japan grows significantly every year. Along with these developments, the establishment of mosques is also continuously carried out to facilitate Muslims for their religious activities.

Furthermore, Yo Nonaka said that currently, Muslim-friendly facilities are also available in several crowded places, such as places for prayer at airports, stations, and department stores in Japan. This is one of the efforts of the Japanese government and industry to bring Muslim tourism.

“In addition, the Japanese government has also paid great attention to the issue of halal food and the certification to attract tourists from Islamic countries. Several restaurants have served Muslim tourists by providing menus with a Muslim-friendly concept,” explained Yo Nonaka.

On the same occasion, Mamoru Hasegawa, who is a Muslim convert, was present to share the story of his journey to becoming a Japanese Muslim. His nickname is “Hasan” which is his current Islamic name.

According to him, learning something new is not an easy thing, such as his interest in studying Islamic teachings and at that time he still lacked the confidence to practice it in daily life.

Furthermore, he shared that his environment was one of the reasons he started to put his heart to the teachings of Islam. Making friends with other Muslims in Japan made him more confident to study Islam and ready to become a Muslim by deciding to take his shahada at the Akihabara mosque.

“Japanese halal mosques and restaurants are increasing. Although they are still considered a minority, we can improve the image of Islam among other non-Muslims in Japan,” said Mamoru.

The activity was then continued with a discussion session with approximately 300 participants who attended virtually and went smoothly until the end of the event at 16.00 WITA.