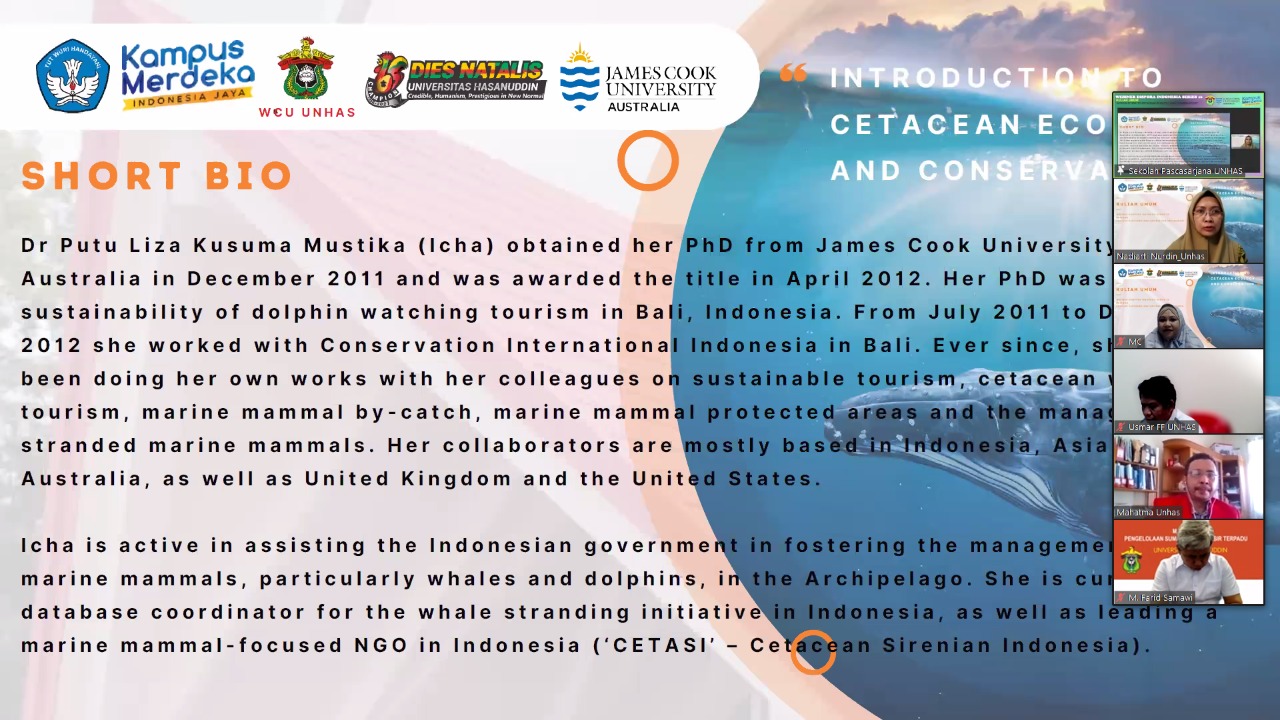 The Dean of the Unhas Graduate School, Prof. Dr. Ir. Jamaluddin Jompa, M.Sc., explained that this activity is a scientific forum for knowledge development and discussion on the role of humans in maintaining marine ecology.

The activity was officially opened by the Director of Unhas Partnership, Dr. Mahatma, S.T., M.Sc. He said that this activity was established as a forum for scientific exchange and a strategic step to expand and build partnerships to support Unhas’ achievements in WCU (World Class University) Program.

Furthermore, Mahatma added that the diaspora webinar is a program to support the WCU Program, in which every faculty is involved to present diaspora according to their respective studies. This activity hopes that it will become a gate for Indonesian diaspora scientists to collaborate.

Dr. Liza explained that Cetacea biologically is the name of the infraorder in the Mammal class. All cetaceans are marine mammals without hind limbs and move by vertical tail movements, including all types of whales and dolphins, such as porpoises and beaked whales, which live in saltwater, brackish water, or freshwater.

Cetacea was the name of the order (Ordo Cetacea). Cetacean is part of the Order Cetartiodactyla, which includes hippos. Morphologically, Cetacean is separated into two categories, Odontoceti (Toothed Whale) and Mysticeti (Baleen Whales).

In general, the body of the cetacean species is slender and elongated. The forelimbs are called flippers. There is a dorsal fin in all cetacean species. The species that has the largest dorsal fin is the killer whale (Orcinus Orca), reaching a maximum height of 1.8 meters.

All species have a layer of fat with a maximum thickness of 60 cm, but they do not have neck, earlobes, hair (except babies of some species), sweat glands and tails.

The activities guided by Dr. Nadiarti Nurdin, M.Sc., (Chairman of the Water Resources Management Study Program) as the moderator was attended by approximately 200 participants.