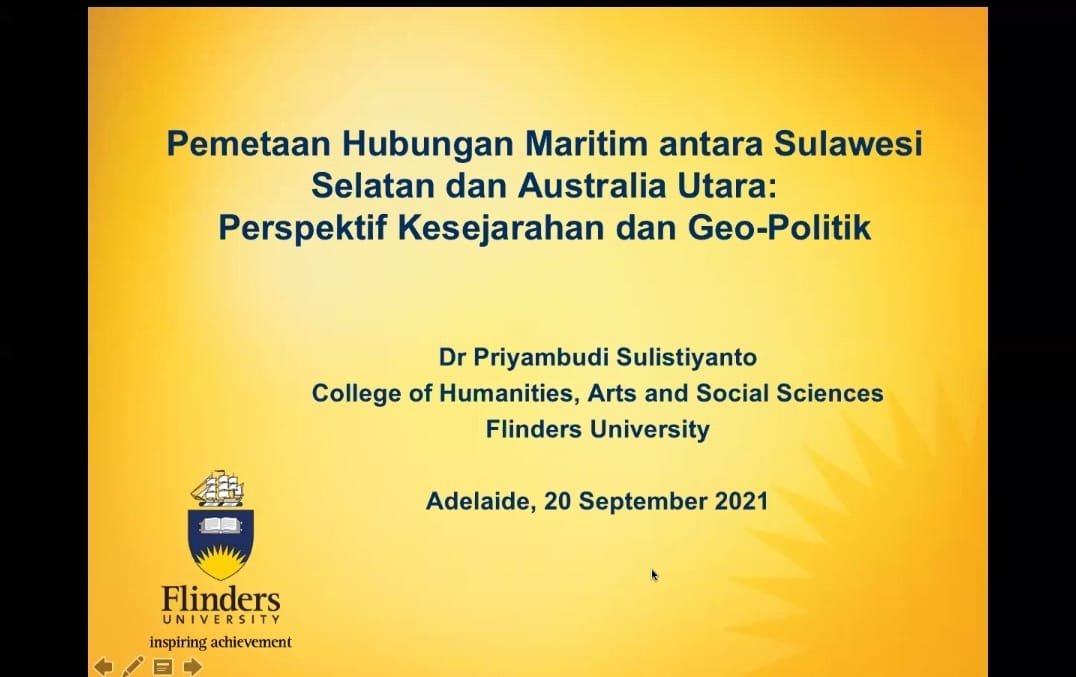 Starting the activity, the Dean of FISIP, Prof. Dr. Armin Arsyad, Ph.D., hope that this guest lecture will benefit Unhas students and lecturers. The lecture was expected to open new insights, especially regarding the relationship between South Sulawesi and Australia in the maritime sector.

“The topic discussed is fascinating, where the two countries must be mutually beneficial in the aspect of the political system. From a geopolitical perspective, Indonesia and Australia have long-established cooperation in the economic and security sectors. The speaker will further enrich our knowledge with information on this matter,” explained Prof. Armin.

The activity was officially opened by the Vice-Rector for Research and Innovation, Prof. dr. Nasrum Massi, Ph.D. In his remarks, he said that the guest lecture was held as a forum for scientific development and one of the strategic steps of Unhas to expand and build partnerships both in national and international stages.

Furthermore, he also expressed his gratitude for the contribution and active involvement of all Unhas work units who attended the activity by presenting resource persons with extraordinary experiences. All faculties are involved in providing information platforms according to their respective fields. This is a tangible form of collaboration between all parties to support Unhas’ target as WCU.

History has explained how the relationship between Indonesia and Australia was through the Taripang (Sea cucumber) trade route between Makassar/Bugis seafarers and the Aboriginal inhabitants of the Arnhem region, Northern Australia. The relationship between the two areas can also be seen from the support of the port labor unions in Australia for the struggle for Indonesian independence in 1945-1949 and several other historical figures.

In addition, it also has an impact on Geo-Strategic studies in the field of maritime around Sulawesi, Maluku, and Arafura. Furthermore, we as academics must examine the possibility of a struggle in controlling natural and human resources between the superpowers, middle powers, and emerging powers of Eastern Indonesia.

The activity moderated by A. Ahmad Yani, M.Sc., MPA., M.Sc., (Lecturer of the Department of Administrative Sciences, FISIP Unhas) was attended by approximately 100 participants.