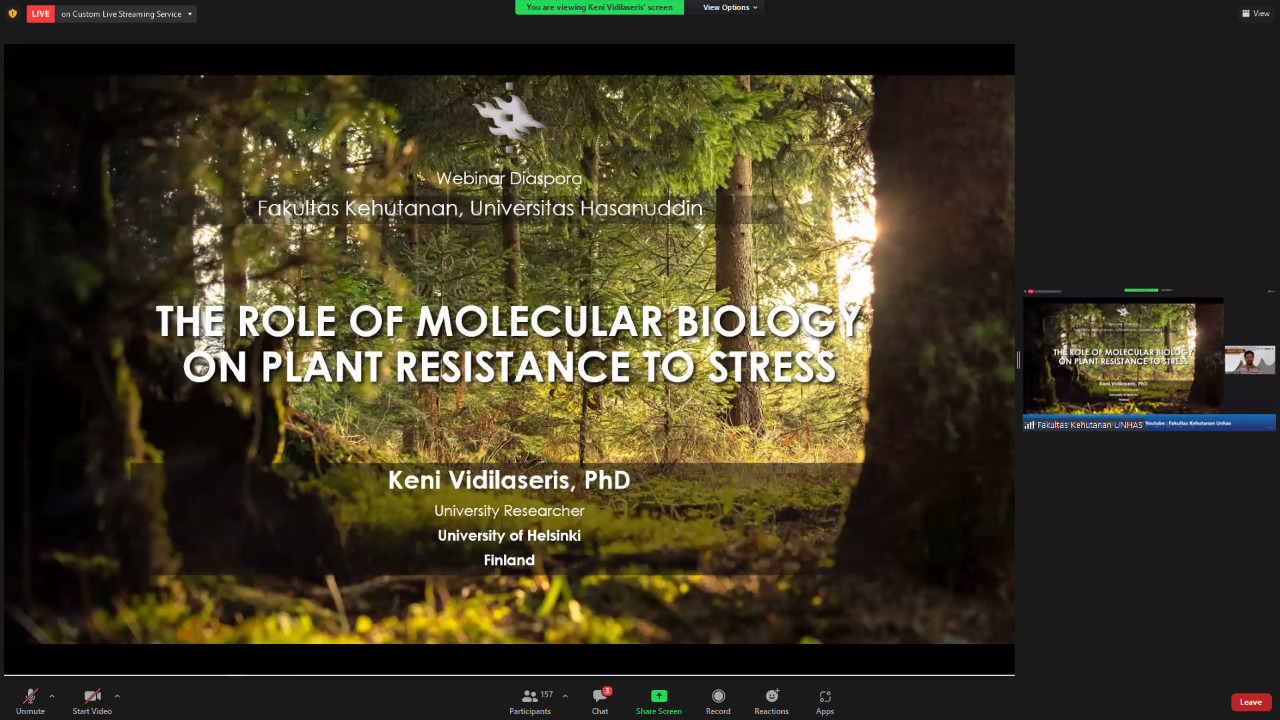 The Faculty of Forestry, Universitas Hasanuddin (Unhas), held a public lecture discussing “The Role of Molecular Biology on Plant Resistance to Stress”. The webinar presented Dr. Keni Vidilaseris (University of Helsinki) as a speaker. The activity was conducted virtually using the Zoom Application on Friday (24/09).

Dr. Keni explained that human cells carry out genetics codes, including DNA and RNA arranged in the cell nucleus and formed into essential compounds. Then there is a protein synthesis process in the cytoplasm, beginning with the process of opening the double chain owned by DNA with the help of the RNA polymerase enzyme.

The process of protein synthesis will produce a protein that has been processed mechanically and chemically needed by every living thing.

“Proteins are macromolecules formed from amino acids. It has several benefits of amino acids. It will be easily absorbed, and the effect is fast. It is needed to increase photosynthesis in plants and chlorophyll content, improve metabolism, increase resistance to stress at high temperatures and low humidity levels, “explained Dr. Keni.

Furthermore, Dr. Keni explained that advances in plant biotechnology, especially molecular biology, will provide opportunities to overcome and solve problems in plant breeding. Molecular breeding will also overcome obstacles that seem challenging to select the traits of superior species in the population because of the complexity of genetic characteristics that interact with environmental factors.

The advancement of science and technology in molecular biology has provided an opportunity to overcome the limitations in conventional plant breeding. So that in the breeding process, it can be known and carried out by various methods.

Terkait:  11 Students of Universitas Hasanuddin Participate in IISMA Program by the Ministry of Education, Culture, Research and Technology

The activity was guided by Sahriyanti Saad, S.Hut., M.Sc., Ph.D., as moderator, and it was attended by approximately 300 participants and lasted smoothly until 16.00 WITA.