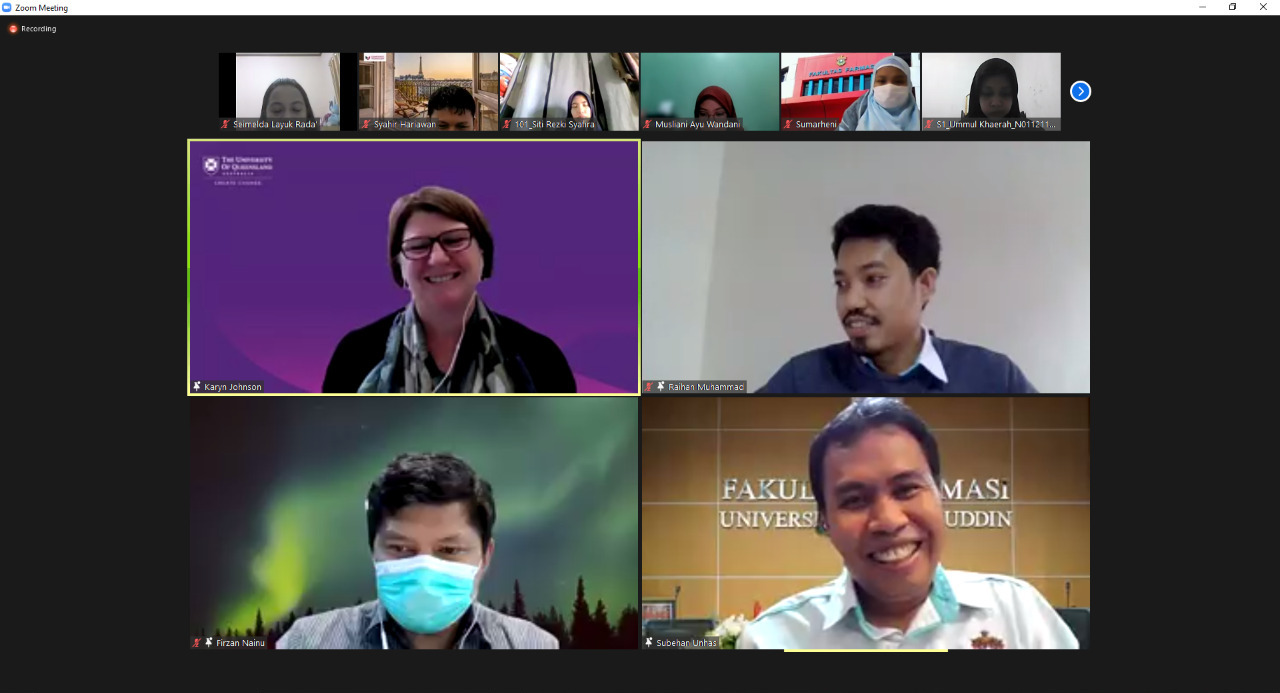 The Faculty of Pharmacy, Universitas Hasanuddin (Unhas), held a Guest Lecture themed “Introduction of Viruses and Basic Genetics”. The activity was conducted virtually through the Zoom meeting application at 13.00 WITA on Monday (11/10).

The guest lecture was presented by Associate Professor Karyn Johnson from the School of Biological Sciences, The University of Queensland, Brisbane, Australia. He is an expert on Viruses who has many contributions to Genetic Science research.

Prof. Karyn explained a few things about an Introduction of Virus and Basic Genetics, including understanding how genes determine traits and Mendel’s pea plant experiments contribute to understanding genetics and inheritance. Moreover, Prof. Karyn also discussed the application of Punnett Square boxes to predict genotype and phenotype ratios and understanding how and why the test cross can be helpful.

Initially, Prof. Karyn explained that the gene is the basic unit of inheritance for living organisms, as an instruction for a trait passed down from generation to generation. In contrast, attributes are inherited physical characteristics.

For example, the red colour seen in flowers has genetic traits. Traits are the small parts of an organism’s phenotype, such as the red colour seen in flower petals. A trait can also be a physiological trait that can be inherited, like the ability to taste. Sense of taste depends on taste receptors on the surface of the gustatory cells protruding through the pores on the surface of the tongue,” explained Prof. Karin.

In general, if the offspring of a cross between pure plants appears to be only one parent to a particular trait, Mendel calls it the dominant trait. According to the simple observation, Mendel proposed his first principle. This uniformity principle states that all offspring from such a cross (where the parents differ only by one trait) will appear identical.

Modern understanding of how traits can be passed down from generation to generation comes from a principle proposed by Gregor Mendel in 1865. However, Mendel did not discover this fundamental principle of inheritance by studying humans, but through Pisum sativum, pea plant in common.

Mendel crossed pure-breeding parents and crossed the hybrid generation, and recrossed the hybrid progeny back to both parental lines. Those crosses (which in modern terminology are referred to as F1, F1, F1, F2, B1, and B2) is the classic cross to produce a genetically modified generation of hybrids.

The material presented was then proceeded by a discussion and question and answer session. The public lecture, which approximately 300 participants attended, went smoothly until Thursday (14/10).