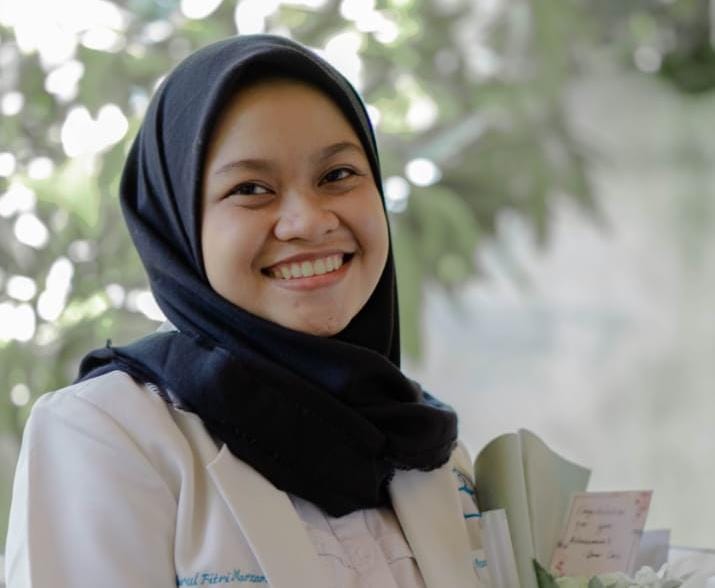 A total of five students of the Faculty of Pharmacy, Universitas Hasanuddin, were awarded the German Academic Exchange Service, or DAAD (German: Deutscher Akademischer Austauschdienst) scholarship which was announced last June.

Ardiyah Nurul Fitri Marzaman, one of the scholarship awardees, through an interview on Thursday (26/08) said that he immediately tried to apply for the DAAD program right after he knew that the Faculty of Pharmacy Unhas was given an opportunity to be the host institution.

“I saw information related to this scholarship for the first time on the faculty’s website displaying the requirements requested by the DAAD such as degree certificate, transcripts, CV and other files. From the process of preparing the files to registration, we were guided by the DAAD coordinator of the Faculty of Pharmacy as well as the Vice Dean for Academic, Research and Innovation, Prof. Dr. rer. net. Marianti A. Manggau, Apt. ” said Ardiyah

Ardiyah admitted that the selection process was very competitive because the applicants were from all over the ASEAN countries. All the applicants were asked to submit their requirement files directly through the portal provided by the DAAD. He said he was required to also send a Letter of Acceptance (LoA hereinafter) from Unhas as the host institution. Applicants who were eligible to receive the scholarship would be announced on their respective DAAD portals. Besides, he added that the scholarship did not limit or provide any special quota; it was open to all students under the same wide range of opportunities.

Terkait:  Jusuf Kalla, the Chairman of IKA Unhas for the Period 1997-2022 Receives the Highest Service Star from the Japanese Government

“It is a bit difficult to meet the IELTS score requirement of 6.5 in this pandemic era. But thank God, after discussing with the DAAD party, DAAD is willing to accept the institutional TOEFL score,” added Ardiyah.

As the awardee of the DAAD scholarship, Ardiyah hopes that he can pave a way for serving the world of research and education as this is such a good opportunity to gain more knowledge and experiences to lead a greater quality mainly in the research and education field in the future. Apart from that, Ardiyah hopes that he can acquire networks from various countries through this program.

Actually, the target students to be awarded this scholarship are from 7 ASEAN countries, namely Malaysia, Thailand, Timor Leste, Laos, the Philippines and Vietnam. However, due to the pandemic and the short promotion time, there were no applicants from those ASEAN countries, so after conducting a further discussion with the DAAD party, DAAD allowed the first-year program without foreign students and only admitted a total of 6 awardees from Indonesia.

Therefore, these efforts are in line with the role and contribution of supporting Unhas to become a world-class University (WCU). She really hopes that there will be more Pharmacy students of Unhas taking part in this program to enhance their quality which further bridges more opportunities to escalate the number of foreign students in faculties of unhas.

Following is the list of awardees’ names of DAAD scholarship from the Faculty of Pharmacy Unhas: