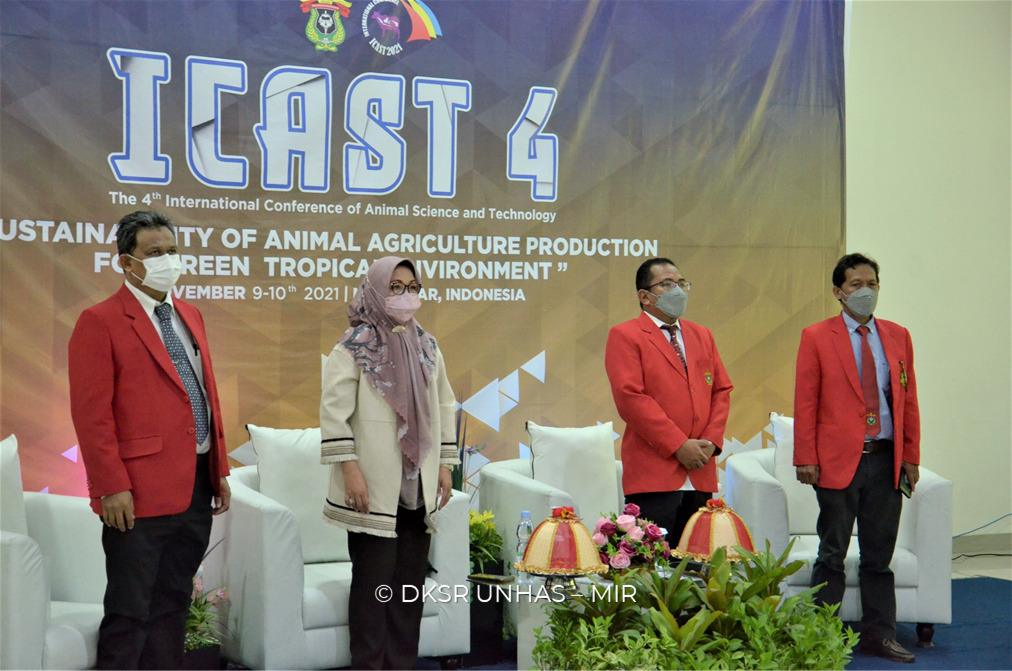 Faculty of Animal Science of Universitas Hasanuddin (Unhas) conducted a virtual conference entitled “The 4th International Conference of Animal Science and Technology (ICAST)” under the theme “Sustainability Animal Agriculture Production for Green Tropical environment”. The conference was conducted virtually using the zoom meeting application and live streaming on the Youtube channel of the animal science faculty on Tuesday (09/11).

Dr. Muhammad Ihsan Andi Dagong, S.Pt., M.Si., the committee chairman, explained that the 4th ICAST continued to be conducted online as before. The event was participated by participants from 61 different universities worldwide, with a total of 237 articles.

Ihsan thanked all parties involved in preparing the 4th ICAST. He hoped that the conference would have an impact on increasing understanding and information to the participants. The importance of local livestock should be introduced as a nation’s wealth that is not inferior to other countries’ livestock.

On the same occasion, Prof. Dr. Ir. Lellah Rahim, M.Sc. (the dean of the animal science faculty), explained that the faculty continues to contribute to the development of smart technology. With a wealth of local livestock species in Indonesia, 58 species, this potential should be developed and introduced to the international community.

“Various types of local livestock that still exist today, such as peanut goats, arrowroot sheep, Bali cattle, Madura cattle, striped buffalo and others, have not been widely exposed in the international community. This is a great opportunity to encourage the welfare of the breeder in the production process using advanced technology,” explained Prof. Lellah.

The activity was officially opened by Prof. Dr. Dwia Aries Tina Pulubuhu, MA., the Rector of Unhas. Prof. Dwia said that livestock is a sub-sector with a strategic role in improving economic and human resource development. The strategic role can be seen with the function of livestock as a provider of animal protein essential for the growth and development of the human body.

Moreover, Dwia added that the demand for livestock products is increasing.  The increasing demand is related to the increase of people understanding of the consumption of animal protein from livestock. One of the potential sources of protein that can be developed is the local livestock. Local farms can improve the welfare of farmers if the local farms are designed professionally.

“The topics discussed will encourage the understanding of sustainable farming and welfare. I believe that the activity will gather the ideas in presenting farms that have major impacts on society,” said Prof. Dwia.

After the opening, the event moved to the presentation session by speakers.

As one of the speakers, Prof. Maynor Alberto Vargas explained the “Effect of Lanthanide ions stresses on Lactic Acid Fermentation Performance of Streptococcus Thermophilus during Milk Processing”.

Prof. Maynor concluded that the presence of Ln³ ions exerted an inhibitory effect on the biochemical process of lactic acid fermentation in skimmed milk culture media with SNF% between 5% to 20% and with incubation temperatures from 5°C to 65°C, showing the highest effect at 45°C.  The inhibitory effect occurred with the concentration of ion Ln³+ between 0,10 mmol/L dan 10 mmol/L.

Terkait:  11 Students of Universitas Hasanuddin Participate in IISMA Program by the Ministry of Education, Culture, Research and Technology

Prof. Min Du, the second speaker, discussed “Vitamin A in Intramuscular Fat and Muscle Development”.  He described that nutrition and genetics interact to influence the growth of livestock. When an animal actively develops and grows, this condition is susceptible to nutrient deficiency and change.

“We focus on skeletal muscle, and the development of adipose tissue is very susceptible to nutrient deficiency because of its low priority in the distribution of nutrients. Skeletal muscle and adipose tissue mainly develop during the fetus and neonates stage,” said Prof. Min Dua.

The activity was divided into two sessions with different speakers. Approximately 200 participants from various institutions attended the conference.