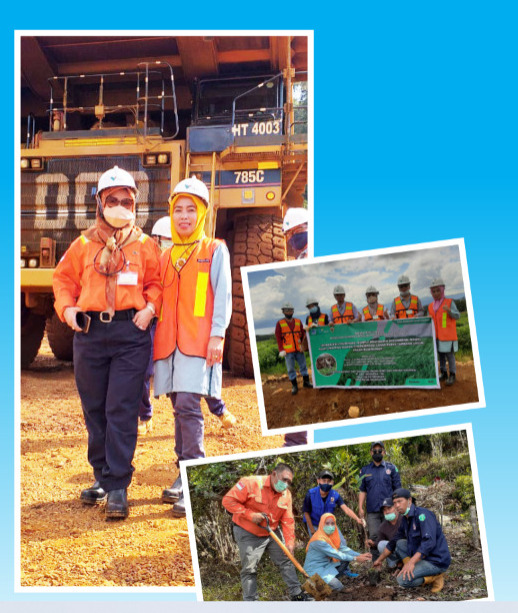 Erlin Harry is an alumnus of the Department of Soil Science, Faculty of Agriculture, Universitas Hasanuddin, who completed his studies in 1996. At the moment, she works for PT. Vale Sorowako. She worked for several companies, yet she decided to return to his hometown in Malili, South Sulawesi, not far from Sorowako.

Erlin’s career began in 1998. He decided to join an internship program at PT. Vale, which at that time was called PT. INCO. For about a one-year internship, Erlin was appointed a permanent employee in 1999 and became a field supervisor, the reclamation team leader who supervised heavy equipment. As an alumnus of the Soil Science Department, she is responsible for reclamation and nurseries.

“PT. Vale is very concerned about the environment in the first place. Since the beginning, there has been reclamation work, but I was still involved in the mine at that time. At the beginning of joining, there was no particular position designated for agricultural graduates. Now there are many, and indeed the focus is on overseeing the arrangement of reclamation land and nurseries, “explained Erlin as quoted from Action Magazine Unhas.

During her career in the mining industry, Erlin is experiencing many challenges, especially as a woman who often has to go directly to the field. However, this does not make Erlin feel discouraged to work for the position that was always associated with men. Instead, she thought that she was helped a lot in her work with the presence of male colleagues.

“Work in the current place is very genderless. Now is the time for gender equality. Although the male workers still dominate the leading positions, PT. Vale already has female employees stationed in the mine carrying heavy equipment. In fact, the CEO of PT. Vale is now a woman,” said Erlin.

For Erlin, the role of the family as a motivational boost is very influential in supporting his career. Although there is an unspoken concern for the work being carried out at this time, Erlin can still feel the warmth of the family who lives not far from where he works.

“With today’s busyness, of course, it is necessary to manage time. The mining sector always has busy schedules, like yesterday when preparing for the Reclamation Award. But so far, we can still share time well between work and family,” Erlin added.

Furthermore, Erlin said that he would continue to give the best for the company and continue to give innovative ideas. Erlin also conveyed his biggest dream in the future when he no longer has a career, and he wants to be able to enjoy retirement by having a business that doesn’t take up too much of his leisure time.

“The message to women may be that there is a dilemma in determining their career. For women who will work, especially in the mining sector, you don’t have to worry that working in the mining sector is very exciting and fun. Especially for those who take care of reclamation and nurseries like me,” explained Erlin.

At last, Erlin said that as a woman, you should never be afraid to explore your potential in various fields of science and work. With many challenges, there is a place to channel multiple ideas and innovations applied in the related field.