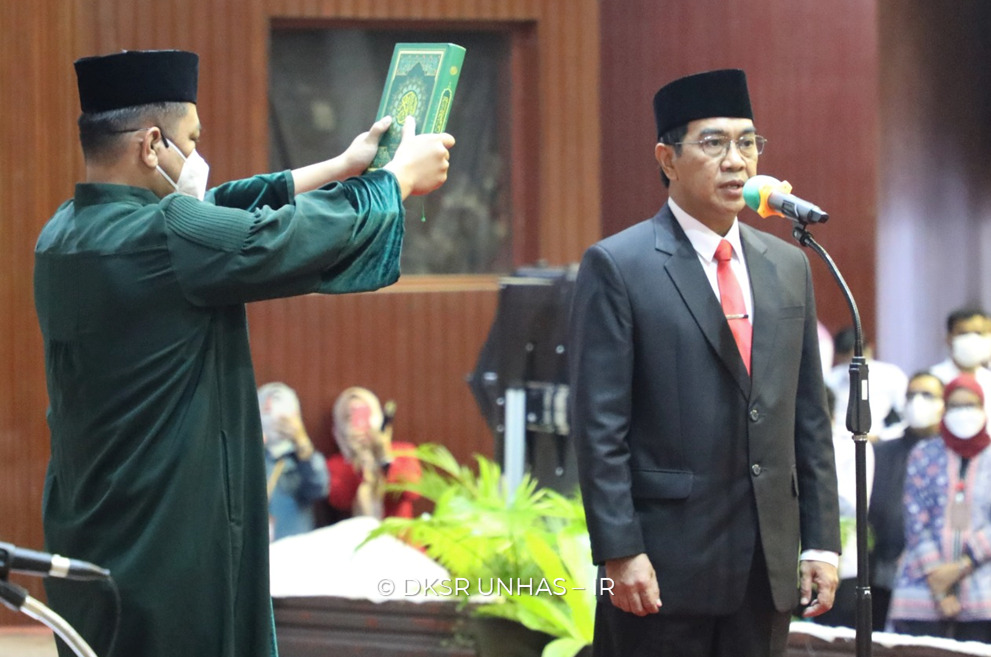 The Board of Trustees (MWA) of Hasanuddin University officially inaugurated Prof. Dr. Ir. Jamaluddin Jompa, M.Sc., as Chancellor for the 2022-2026 term of office.

On that occasion, the Chairperson of MWA Unhas Drs. Syafruddin in his speech expressed his gratitude to Prof. Dwia for the dedication and devotion given to Unhas during his leadership. He also congratulated Prof. Jamal on the mandate to lead Unhas.

Suafruddin described the long process of selecting the Unhas Chancellor.

“The election process took place in a democratic manner with a fairly long period of 6 months. For each process, I was always present to ensure and secure that the entire series of elections were carried out properly until finally producing the new Chancellor of Unhas,” explained Drs. Syafruddin.

He hopes that, under the leadership of Prof. Jamaluddin Jompa, Unhas can further expand its wings, and be able to face a global association that is full of challenges. Not only that, Unhas’ achievements in various fields can be maintained and improved.

“Unhas is no longer talking about eastern Indonesia. But Indonesia in general. I believe Unhas will continue to produce excellent human resources who can take part in the global arena,” concluded Drs. Syafruddin.

Previously, the decision letter for the dismissal of the Unhas Chancellor, Prof. Dr. Dwia Aries Tina Pulubuhu, MA. Also taking the oath of office and giving the title of office by the Chairperson of the Unhas MWA to Prof. Dr. Ir. Jamaluddin Jompa, M.Sc., as Chancellor for the period 2022-2026.

On Tuesday (26/04), a meeting was also held in order to hear the presentation of the final memory report for the chancellor’s office. Where, in this activity, Prof. Dwia gave an overview of Unhas’ achievements during his leadership in front of members of the academic senate.