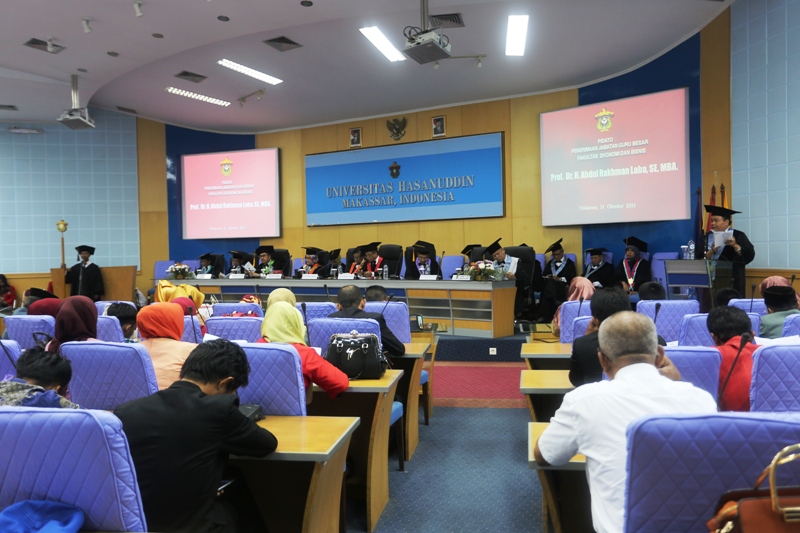 The dependence of a state towards the foreign capital will result to financial crisis. As the process of independent understanding on finance and discipline will decline, therefore scraping the export competitive capacities.

“If this is not prevented, then the economic interventions will result to the matters pertaining the competitive capacity, and eventually lead to financial issues,” stated Prof. Dr. Abd. Rakhman Laba, S.E., MBA during his scientific oration for his professorial promotion in the field of Management, Faculty of Economic and Business, Unhas, Monday (31/10/2016)

The man that was born in BulloE Jeneponto, 25 January 1963 stated that the financial capacity must be supported with the government regulations and bank that conducts the export credits, in order to set a credit interest that is reachable, therefore maintaining the capacities of exporting actors.

“Learning from a number of economic growths, the economic regulations set by the government is crucial for the export-import stakeholders,” stated the father of three children (husband of Rosmawati Yusuf) that completed his Doctoral studies (2005) in Southern Cross University, Australia.

Specifically for South Sulawesi, the son of Laba Tamanroya and Nasi Nova stated that there are no indications of the government regulation that specifically increases the performances of the export conducts, as the regional government only follows the regulations set by the central government when it pertains the export performance advancement measures. But, in some circumstances, the regional government thinks pragmatically to chase down and reach the desired regional revenue figures. Therefore, the retribution of the export products for among the districts maintains a firm influence towards the commodity prices that has become the major exporting commodity.

“As a result, the cost of goods that is exported by South Sulawesi is higher compared to other states,” he stated during his oration under the title of “Financial Catastrophe: Canalization of Foreign Capital, Impact Towards the Financial Capacity of Indonesia.” He further stated that the results of such high exporting prices are that the competitive level in International markets is not ideal.

The allocation regulation of foreign investments in South Sulawesi that is based on the natural resources, stated the Unhas Graduate of 1988, has resulted to developments among regions, leading to competitions between regional governments for overseas company partnerships. Without realizing, there are several commodities that if replicated by new investors, will lead to the decline of the export industry that is already present. He gave an example, a company in the Barru Regency that sold processed goods overseas in the past few years stopped their production as the result of the raw material limitations that rely on fisherman as the supplier. After numerous attempts to convince the foreign companies, the company then was able to operate back.

Rakhman Laba concluded in his scientific oration that South Sulawesi must refigure the phenomenon of foreign company interventions that in several instances have hidden behind the notion of corporate social responsibility (CSR) or the Green Community program, though their real aim is the monopolization mission that is hidden behind such familiar programs. Many of the foreign companies have shown intentions of being pro environment, though their real ambition concerns the domination of the national resources.

“The Government of South Sulawesi must open their eyes to Wakatobi that have immense notions of ocean conservation embraced by German resort management, which have throughout time pushed away the local Bajo that has constantly shouted “Return My Ocean,”” strengthened Rakhman Laba, recorded as the 351st Professor of Universitas Hasanuddin.

His professorial promotion ceremony’s scientific oration was attended by the Unhas Rector Prof. Dr. Dwia Aries Tina Pulubuhum MA, which assessed Prof. Rakhman laba’s oration as highly relevant towards the conditions of government policies in the status quo, which have been known as highly welcome towards the foreign investments that have entered to Indonesia. The Unhas Rector even pushed Prof. Rakhman Laba to state his piece of mind to the government.

Date of FEUH Lecturer: Since 1989 until now

Position: Lecturer in the MM Unhas 1994 until now, lecturer for S3 Program on Economics Unhas, 2003 until now.