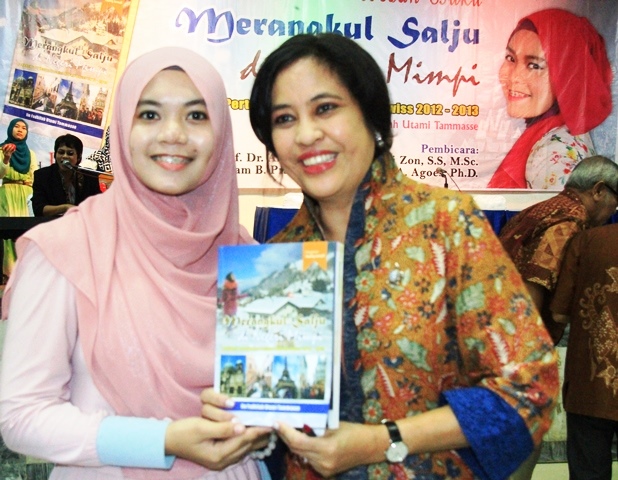 Iin Tammasse (left) along with Linda Jalil, writer and former reporter of TEMPO during the book launch in Jakarta, December 2014 (Photo:mda)

Iin Fadhilah Utami Tammasse, a semester IV student of the Faculty of Medicine Unhas, Monday (6/5) departed to the Netherlands for a research presentation that was accepted for “The 23rd International Student Congress of (Bio) Medical Sciences (ISCOMS),” Netherlands.

The eldest daughter of the couple Drs. H. Tammasse Balla, M.Hum, and Dr. dr. Jumraini, Sp.S will be the only representative of Universitas Hasanuddin for the event. There are several students of the Medical Faculty that sent their abstracts, even one from Iin’s senior and a Co-Ass student. But none of the above had the substantial capacity to represent Universitas Hasanuddin and be accepted in the event, except Iin Tammasse, which surprisingly is still in the second year in her faculty.

“In the event, Iin will present a scientific paper entitled “The Efficacy of Trans cranial Magnetic Stimulation in Improving the Motoric Function of Post Ischemic Stroke Patients.””

The young researcher from the Faculty of Medicine was born on 8 April 1995, will, later on, meet with students from all over the world in Groningen University on the 7th until 10th of June 2016. Iin will be accompanied by both of her parents, which will be enjoying the first sahur in Makassar, followed by fast breaking in the Netherlands.

The International Congress will be the venue for talented young researchers that have the same passion for research, an event conducted since two years before the birth of Iin in 1995. Throughout the congress, the participants will stay at the designated lodging that is: “Stichting Huisvesting Builtenlandse Studenten, Friesestraatweg 18, 9718 NH in Groningen, The Netherlands.”

Iin is scheduled to depart Monday, 6 June 2016 to Amsterdam via Emirates from Jakarta to Amsterdam. The flight will take approximately 17 hours, and transit in Abu Dhabi.

“Sahur in Makassar, and Iftar in Amsterdam. The time comparison between Makassar and Amsterdam is 6 hours,” commented Tammasse Balla, the parent of Iin.