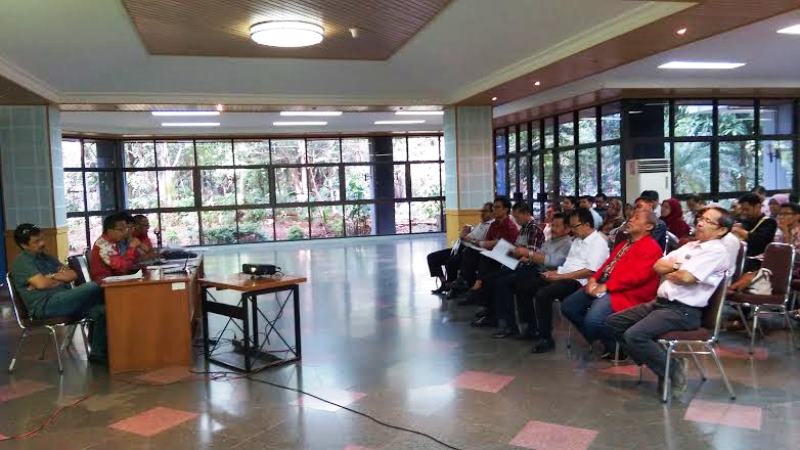 The atmosphere of the inaugural National Unhas Alumni gathering in the Rectorate Building, Monday (13/6). (Photo:mda)

Ebiet G. Ade that was born in Banjarnegara 21 April 1954, in the event, will not be the first of his visit to Unhas. Several years past, the father of four children (husband of Yayuk Sugianto) was present during a newly enrolled student’s reception ceremony taking place at Baruga Andi Pangerang Petta Rani on 16 August 2011.

The youngest of the six relatives will bring several of his made songs with the combination of guitar plays. Ebiet, the son of Aboe Dja’far and Saodah, has been well known for the beautifully crafted music he creates by himself, never did he sang songs created by other musicians.

The committee headed by Anas Iswanto Anwar, 13 June 2016, started in the inaugural meeting that was attended by members, and also the Head of the Unhas Alumni Association (IKA) Jabodetabek, A. Razak Wawo. Chairman of the committee, Abd. Rasyid J., explained that the national alumni gathering Unhas is aimed not only for the cause of gathering among alumni, but also intended to develop and solidify our solidarity. Other objectives include facilitate a room to share numerous discussions, and contribute towards intellectual thought on the construction of a better and unified Republic of Indonesia.

Razak Wawo proposed that during the alumni gathering, there should be a level of intellectual sharing through the making of a scientific seminar comprising matters of contemporary elements. At the same time, there would be approximately 2000 alumni of the Engineering Faculty Unhas that will gather during the event, labeled “Engineering Alumni Misses Campus.”

“IKA Jabodetabek once conducted a seminar on crops in the IPB Campus before,” stated Razak Wawo.

“The theme of this national alumni gathering is “Role of Alumni Unhas Becoming a World Class University,”” stated Cido, a familiar nickname for the Vice Rector III Unhas.

During the course of the alumni gathering, the other series of events planned include “Tudang Sipulung,” with the Rector report from Dwia Aries Tina Pulubuhu and “Center of Thought” brought by the Chairman of IKA Unhas, M. Jusuf Kalla, “Traces of Nostalgia” Alumni Campus Baraya – Tamalanrea, and a warm gathering of the alumni.

Besides that, it is also on the agenda to exhibit a cultural performance on the 60 years journey of Unhas, the handing over of a token of appreciation towards alumni with high achievements, and the performance from Ebiet G. Ade, that will all be conducted on the 10th of September 2016 night in the Football Field Unhas.

The registration of participants according to the Secretary of Committee Ilham Jaya, can be done through SMS/Whatsapp/Line/Twitter with the format:

These are the Best Graduates of Unhas June Period 2016

Minister of Youth and Sports: Careful of Narcotics, Disengaging the Golden Era