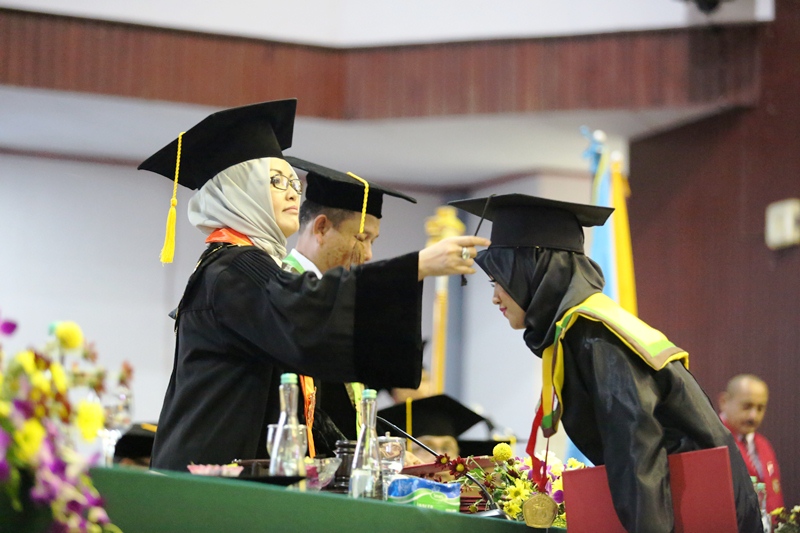 Dwia stated in 2016, 118.000 had their interest in enrolling to Universitas Hasanuddin. Out of that overall figure, approximately 5.000 people (4,23%) were accepted in this higher education institution. In the national level, such numbers of applicants positions the University being the second most favored university in Indonesia.

“Therefore all of you are chosen ones to continue education in Unhas. Being a student of Unhas is not a task of ease,” stated the Unhas Rector Prof. Dr. Dwia Aries Tina Pulubuhu, M.A., when she graduated 998 graduates during the second graduation period in Baruga Andi Pangerang Petta Rani, Tamalanrea Campus, Wednesday (21/12).

In that opportunity, Dwia besides stating her gratitude to the parents of the students that have trusted Unhas to educate their children, also inserted messages to not have trust upon irresponsible individuals that offers services of graduation or that can assist them in that process.

“Unhas enrollment system can be in full accessed in the website,” stated Dwia during the Bachelors program graduation ceremony, attended by the head of the Board of Trustees (MWA) Unhas Prof. Dr. Basri hasanuddin, M.A., Head of the Academic Senate Prof. Dr. H. M. Tahir Kasnawi, S.U., Head of the Professor Board Prof. Dr. Ir. Abrar Saelng, S.H., M.Si., and a number of Academic Senate and Professor Board members of Unhas, parents of the graduates, and a number of other invitees.

The Grade Point Average (IPK) of the Unhas graduates time to time have increased. In this graduation ceremony, approximately 56% of graduates have attained a GPA of 3,50 above, with four years of studying period reaching 14%. Meanwhile those that completed their studies between 4-5 years accumulate to approximately 61%.

“Around 24% of the graduates needed five years before the completion of their studies, maybe they felt too comfortable staying in Unhas,” Dwia stated as she was responded with applauses from the graduates.

“I do not want the Unhas graduates to become popular because of their deviating and disappointing attitudes, for example corruption,” Dwia seriously voiced.

The Unhas graduates in the ceremony, stated Unhas Rector, have also attained 12 major International achievements, including in the field of scientific presentations and karateka. What is truly stunning is that in the year 2017, there were 1.078 proposals of student research.

Such achievements stated Dwia, cannot be released by the role of lecturers and professor that have themselves, advanced their numbers of International journals, now reaching to 1.041 journals that are of SCOPUS indexed.

In the same place, Thursday (22/12), Unhas also graduated 629 Doctoral, Magister, Specialist, and Profession programs from a number of study programs of Unhas.

Muhammad Dzulkifli Ashan and Lidya Prawiraharjo Thauwrisan, each from the program of Agro-technology Faculty of Agriculture and Management Faculty of Economics and Business Unhas, each are the best graduates for both exact and non-exact sciences of Universitas Hasanuddin, Second graduation period, Wednesday (21/12). For the achievement, both the graduates are rewarded certificates and BNI savings of IDR 2.500.000.

Best Graduates of Each Faculty

Muhammad Dzulkifli Ashan and Lidya Prawiraharjo Thauwrisan besides becoming the best graduates in the University level, they also held the title of being best graduates in each of their respective Faculties (Agriculture, and Economics and Business).

These are the Best Graduates of Unhas June Period 2016

Approximately Half of the Graduates Attained a GPA above 3.50