“Deer Married? I Didn’t See It” 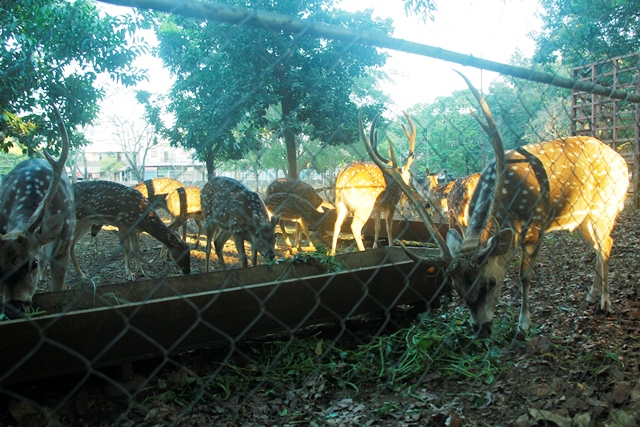 Coinciding with the National Resurrection Day, 20 may 2016, I along with several of my friends went to have a look at the deer located at the left of the Unhas gate 1. This though was not an ordinary visit, but of academic essence. As this was one of the creative writing tasks given by a lecturer, as a replacing task for the finals. Our lecturer chose the task to write a piece on deer, to avoid student copy pasting their tasks, therefore must be based on direct field observations.

After a lecture, directly 09.50, I then made my way to the deer cage. When I arrived, I was quite disappointed as the official that handled the Unhas deer was not present at that time.

“He is currently occupied,” said another member of the University security that sat in his post at the 1st gate of Unhas.

“You guys can come back in the afternoon because usually, he will come by to feed the deer,” continued the security officer that tried to entertain my friends and me, though a slight amount of disappointment is still felt.

“Maybe at that time the official will be here,” I said to my friends with an effort to build up their spirits, as they looked weak because the one planned to be interviewed was not there.

We got back to our posts without any results, as there weren’t any officials that we were looking for, and none of our papers yet to be filled.

It turns out that in 16.00 we still have a lecture, which is “Prose Studies.” The lecture agenda is concluded at 17.30, therefore making me along with my friends confused because of the possibility that the officials won’t be in the deer cage anymore by that time. I even thought of starting the observations tomorrow.

“It's about to be night time now,” a friend told me.

“Whatever, as long as we get what we need by tomorrow afternoon including the interviews if there are no obstacles. Pick me up yaah,” I said though with a little bit of disappointment.

“Ok, we will go to the deer cage tomorrow at 16.00. Makes sure not to be late,” reminded another friend of mine.

I was so enthusiastic to visit the deer cage as I needed the information about the deer to construct a story for my creative writing task.

The next day, 22 May 2016, 15.40, one of my friends came to pick me up. I then went along with him. After arriving in the first post that we visited the day before, it turns out that the official did not come for the second day that time.

“Sorry, the official has not come yet,” said a University security guard that greeted us.

“But this is already 16.00, why hasn’t he came yet, sir?” with a little bit of a protesting tone asking back to the security guard.

We then sat down with faces of disappointment.

“What else do you want to ask anyway? Maybe I can help answer the questions,” the security guard suddenly replied.

“Only several questions in regards to the deer, sir,” I stated.

“Maybe I can help out, but keep in mind I don’t know them all,” replied the security guard.

“Oh, It's alright,” which though was not my expectations, but I then was not as disappointed as before.

The security guard looked very nice. He might have pitied us for coming back and forth to the deer cage. The nice security guard is named Salman, stationed in the first post of Unhas.

We then one by one asked the questions, while utilizing our cellphones to record the interview. Of course the first thing I asked the security guard was his name.

“Do I Really need to say my name?” he replied with a smile.

“Of course sir,” suddenly replied a friend of mine.

“My name is Salman,” he replied.

“How many deer are here in this cage, sir?” I asked.

“How much was the total amount of deer when they first came here, sir?” I continued asking.

“Hmm… around 15 that was taken from Bogor,” stated Salman.

“When is the estimated mating season for the deer, sir?” asked a friend of mine.

“I don't’ know as I did not see it,” Salman said while laughing.

“How do you know the difference between male and female deer, sir?”

“You can see if a deer has a horn, that’s a male. Meanwhile, if a deer does not have a horn, then that is a female,” Salman explained.

“Has there been any deer that died in here, sir?”

“Yes. There are five deer that died in the past. The cause was food poisoning. Also horned by other deer, therefore causing issues with their digestive system,” explained Salman.

“None died because of heart breaks right, sir?” a friend of mine jokingly asked a question that made us all laugh out loud. Salman did not answer this question, and further explained that the deer are fed twice a day, and they would eat carrots and kale. Those are the main foods that they eat and the security guards have never given them any other foods except those that the deer likes.

Salman did know when we asked them the total amount of budget needed to provide these deer with their daily food. What is clear is that once the security guard gets the food, they are then fed.

We also asked, does the deer ever get bathed. Salman answered that they do that themselves in the lake without being told to.

“Of course no, no one is brave enough to touch those deer. We might get hit by their horns,” joked Salman.

“Is there a specific way of calling the deer once they are about to get fed? ”

“Yes there is, but I don’t know of it. Only the designated officials know that. He makes a particular sound from his mouth to call the deer,” told Salman.

“Where do the deer usually sleep?” we asked.

“The deer sleeps in a designated cage, also some do so below the trees,” stated Salman.

“When did the deer get sent to Unhas?”

“Where does the deer usually drink from, sir?”

“They usually drink from the lake. But we have beforehand provided two large basins filled with drinking water,” Salman stated.

“They don't drink coca-cola or other right, sir?” joked a friend of mine with his weird questions.

“Yeah that can happen, as long as you bring some for the officials and the university security guards too alright!” replying to my friend’s joke.

“How long usually are the female deer pregnant for before birth?”

“Usually it's around 9 months 10 days for a baby deer to finally get out, and never more than one,” Salman explained.

“What usually are the weird habits of the deer, sir?”

“Weird habits? They would collectively often raise their heads at the same time once they hear an unusual sound, or if they see a lizard. That’s all,” Stated Salman.

“How would we know if the deer was sick?” I asked the last question.

Salman replied, “If they were sick, they would look weak and only sit down, lazy to eat. Just like humans.”

“OK, maybe that is all, sir. Thank you very much for the information given,” we stated together.

“Your welcome. If you come back here, please bring some snacks, alright,” Mister Salman jokingly told us while laughing.

After the interview, we took pictures of the deer as proof of the interview took place. The deer gathered. Maybe they thought that they were about to get fed, but we forgot to bring the food. The matter is that we usually bring bread, though. Then something popped in my mind, that “what if we just interview the deer, maybe we would be able to obtain the most accurate information.” We then went back home and the blank papers from the two days past finally were filled.